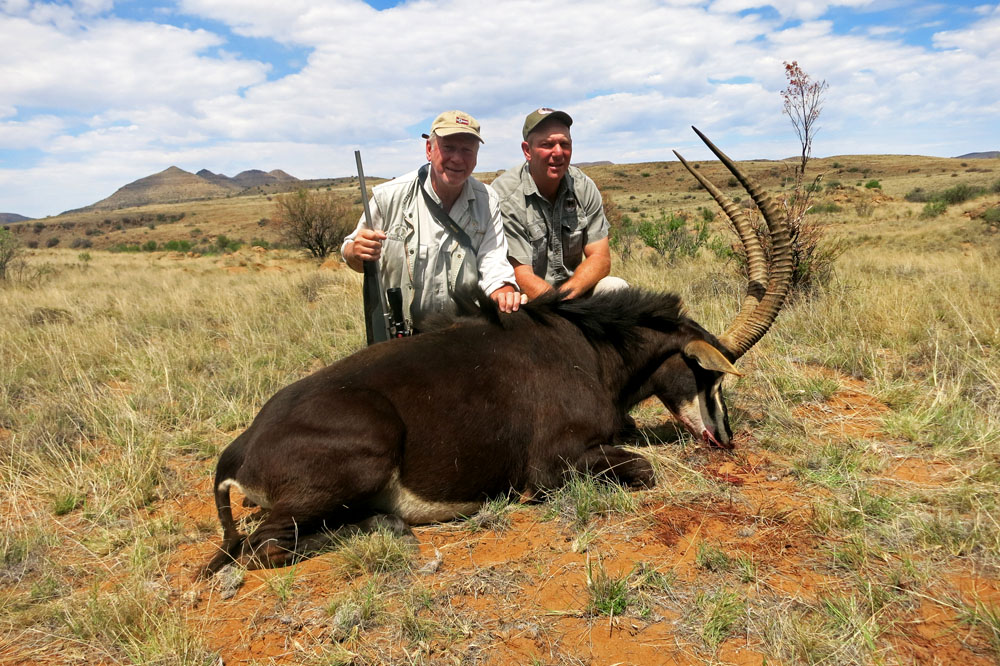 Don first hunted with us in 2009 and returned 13 April for his second safari. With an exciting wishlist, I knew we were going to be busy. Starting in the Karoo concession, we focused on Vaal Rhebuck, Klipspringer, Eland, Black Wildebeest, Mountain Reedbuck and White Springbuck. The Karoo concession is Big country, covering over 70 000 acres. Finding and successfully stalking Vaal Rhebuck and Klipspringer in this mountainous terrain is very challenging, often requiring hours of hiking to get you into a reasonable distance. Don shot very well and within 24 hours both were in the salt. The pressure now being off we focused on the rest of the list. Adding Black Wildebeest on our last morning resulted in one good and one exceptional trophy. Having successfully ambushed the first Black Wildebeest bull, I expected our stay in the Karoo was over. While taking the photos we noticed another bull about 700 yards out. Don pulled out his spotting scope and all I heard was F…..k that is a monster. No selling was required from me on this one. An hour later with a bit of luck on our side the second bull was placed next to the first for a double photo.

The second half of the trip was scheduled for our coastal concesion. Kudu, Bushbuck, Caracal, Blue Duiker and Cape Grysbuck. Taking a slow walk and glassing for Bushbuck brought us onto a lone Kudu bull feeding along the edge of a cliff. I had seen this bull, briefly, about 6 months ago and spent many hours estimating his length. He was a very deep curled bull in the figure 8 shape. Don had wished for a bull with the tips facing forward. I was not prepared to give this bull up, so my selling hat was back on. The more I whispered, the bigger the bull got. Don finally agreed, but unfortunately caught the bull too far back. The Bull stumbled towards the cliff face and all we heard was breaking branches. I was fearing the worst. The bull now dead had dropped 30 yards and was hanging by his horns. I immediately sent for ropes and extra help. Our only hope to prevent the bull from dropping to the bottom was to secure ropes around it and cut it up, piece by piece. With light fading fast, it became a race against time. Two and a half hours later we had conquered the 30 yards and the Kudu was on the truck. The bull measured 53.5 inches, an exceptional trophy. Don was not prepared to give up on a forward facing bull so the next morning an extra Kudu was added to the wishlist.

The morning had been scheduled for a Caracal hunt with hounds. We returned to the same cliff face to listen for Bushbuck barking from the valleys below. Bushbuck bark whenever they see a predator. This helps us tremendously to narrow down our search area for the hounds to cover. As we arrived my tracker looked down to the bottom and said Big Kudu. He was exactly what Don was looking for. We stalked down to a lower section of the cliff, leaving a 150 yard shot. Two great bulls were in the salt. The wishlist plus a few extras were filled except for Grysbuck. Don has this one penned down as priority for his next trip.